The hermit crab is not an insect... Though it most certainly resembles one. Blech! It looks much like a spider—what with its creepy eyes and crawly legs—but is, in fact, a crustacean. As such, the hermit crab has 10 legs and also wears a shell. But it doesn't grow this shell itself. It slips its soft body into shells left behind by snails, you see, and moves into ever-larger ones as it grows. Talk about a strange way to make a home.

Catch phrase
I caught a hermit crab! I think it wanted to be left alone!
Sell price
1000
Special sell price
1500
Is surface creature
True
Weather conditions
Any weather
Where and how ?
Disguised on shoreline
Spawn rates
25
Total catches to unlock
0
Internal Id
028B 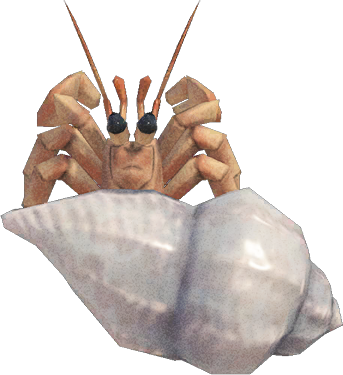