My feathers, but the abalone is a most deceptive sea snail, wot wot! After seeing its dull brown shell from the outside, one would think it quite plain.But take a gander inside, and you'll see that the abalone's home is a shimmering beauty to behold! The inner layer of the shell is made of "nacre," or "mother-of-pearl," and, hoo, what a dazzling iridescent hue! Let this be a lesson! You mustn't judge a sea snail by the outside of its shell. Judge it by the inside of its shell instead.

Catch phrase
I got an abalone! Why do I want a sandwich now?
Sell price
2000
Special sell price
3000
Is surface creature
True
Spawn rates
1–6
Added in version
1.3.0
Total catches to unlock
20
Internal Id
0B13 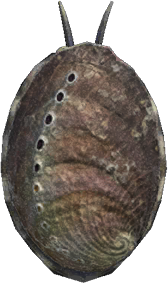